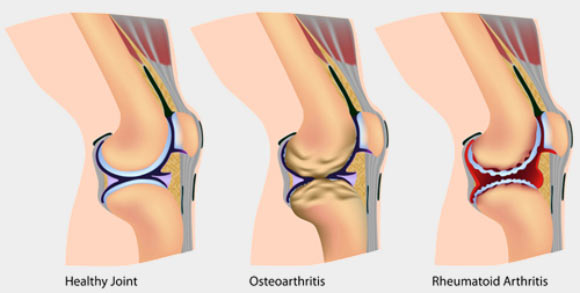 RHEUMATOID ARTHRITIS is a chronic, systemic inflammatory disorder that may affect many tissues and organs, but principally attacks flexible (synovial) joints. The process produces an inflammatory response of the capsule around the joints (synovium) secondary to swelling (hyperplasia) of synovial cells, excess synovial fluid, and the development of fibrous tissue (pannus) in the synovium. The pathology of the disease process often leads to the destruction of articular cartilage and ankylosis of the joints. Rheumatoid arthritis can also produce diffuse inflammation in the lungs, membrane around the heart (pericardium), the membranes of the lung (pleura), and white of the eye (sclera), and also nodular lesions, most common in subcutaneous tissue. Although the cause of rheumatoid arthritis is unknown, autoirnmunity plays a pivotal role in both its chronicity and progression, and RA is considered a systemic autoimmune disease.

While rheumatoid arthritis primarily affects joints, problems involving other organs of the body are known to occur. Extra-articular ("outside the joints") manifestations other than anemia (which is very common) are clinically evident in about 15-25% of individuals with rheumatoid arthritis. It can be difficult to determine whether disease manifestations are directly caused by the rheumatoid process itself, or from side effects of the medications commonly used to treat it - for example, lung fibrosis from methotrexate or osteoporosis from corticosteroids.

The arthritis of joints known as synovitis is inflammation of the synovial membrane that lines joints and tendon sheaths. Joints become swollen, tender and warm, and stiffness limits their movement. With time RA nearly always affects multiple joints (it is a _polyarthritis), most commonly small joints of the hands, feet and cervical spine, but larger joints like the shoulder and knee can also be involved, Synovitis can lead to tethering of tissue with loss of movement and erosion of the joint surface causing deformity and loss of function.
Rheumatoid arthritis typically manifests with signs of inflammation, with the affected joints being swollen, warm, painful and stiff, particularly early in the morning on waking or following prolonged inactivity. Increased stiffness early in the morning is often a prominent feature of the disease and typically lasts for more than an hour. Gentle movements may relieve symptoms in early stages of the disease. These signs help distinguish rheumatoid from non-inflammatory problems of the joints, often referred to as osteoarthritis or "wear-and-tear" arthritis. In arthritis of non-inflammatory causes, signs of inflammation and early morning, stiffness are less prominent with stiffness typically less than 1 hour, and movements induce pain caused by mechanical arthritis. In RA, the joints are often affected in a fairly symmetrical fashion, although this is not specific, and the initial presentation may be asymmetrical.
As the pathology progresses the inflammatory activity, leads to tendon tethering and erosion and destruction of the joint surface, which impairs range of movement and leads to deformity The fingers may suffer from almost any deformity depending on which joints are most involved.

In Ayurveda the disease Rheumatoid Arthritis can be compared with "Aam Vatam". i.e. aam + Vayu. Ayurveda believes that due to weakness of digestive fire and metabolic fire there is an accumulation of improper digested food complex in the body which is termed as "AAm". This aam gets absorbed and then circulates in the body causing various types of ailments. When this "AAm" gets accumulated in the body and vayu gets attached to the same this causes the development of disease known as AAm vatam i.e. arthritis.
As far as the treatment of Aam vatam i.e. arthritis is concerned the benefit of ayurvedic treatment over allopathic treatment is that in allopathic treatment the focus is just on the symptom reduction with the usage various NSAIDS and other pain killers, while the RA factor remains positive for the patient. Where as in ayurveda if the treatment is properly followed along with proper life style modifications as recommended by a doctor the RA factor can be turned to negative. Along with this permanent benefit the aim of giving relief in pain and suffering of the patient is achieved from the very beginning of the treatment.

Ayurveda follows the following guidelines for the treatment of a patient with Aamvatam i.e Arthritis

This principle if followed i.e proper ayurvedic herbal treatment and panchkarma treatment( if possible) given to the patient results are very quick to come.